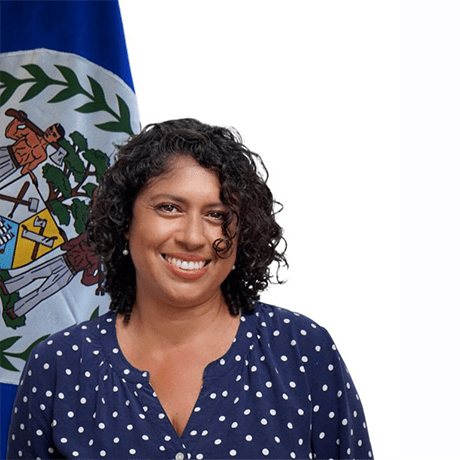 Dian Castillo Maheia (Mrs.) has spent her life in and around schools in one way or the other. She was raised by a single mother who was a teacher and then a principal, and without ever planning to do so, she found herself following in those very capable footsteps.

After completing her Bachelor’s degree as a Fulbright scholar at 19, she came back to Belize and immediately found herself back at home at SCA, her alma mater. For 12 years she was devoted to her girls and to teaching English and Literature, preparing them for CXCs and fully engaged in academic life.

In 2003, married now and with children, Dian’s focus changed. Her world expanded in multiple ways. She was asked to lead the planning of the National Education Summit, a dream of the then Prime Minister and Minister of Education. That work led to the execution of the first-of-its-kind four day summit in Belize, and then the subsequent publication of the papers presented, and the formation of the plan that resulted from the discussions sparked at the summit. Dian then became the Action Plan Coordinator for the Ministry of Education, and helped to monitor and track the progress of the plan across the country.

During this time she also worked with Macmillan Caribbean as a writer and editor of the Language Tree series, and then delivered teacher training sessions in Belize and the Caribbean. As part of a tag team duo with her mom and mentor, she also created and delivered courses in English to private organizations across Belize.

In 2009, as she has often explained, the universe conspired to bring together a team of people who shared a common vision, and their efforts resulted in the birth of Horizon Academy. Horizon Academy is a thriving, unique blend of child-centered, holistic, inclusive, and progressive philosophies and practices. From policy building to implementation, Dian has been at the helm of Horizon as principal since its inception, and has been absolutely committed to first the formation and then the growth and development of this little school who has already served so many of this nation’s children. Her work at Horizon has helped to define and to refine a greater vision for education in our country.

As a teacher, as a mom, as a principal, as a stakeholder in education for all her life, Dian is fully invested in the work of education and fully committed to serving her beloved Belize.